Hunter has worked for Screen since 1990. He is based in Edinburgh and is co-director of Glasgow Film Festival. Read our other critics’ top tens here. 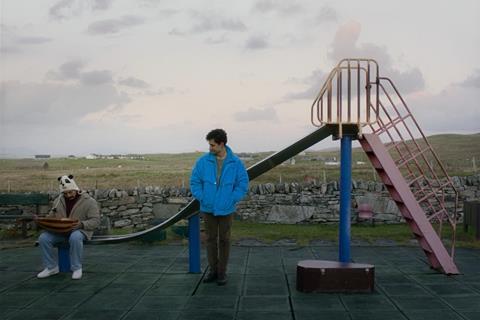 1. Limbo
Dir. Ben Sharrock
The ghosts of Powell and Pressburger seem to be watching over Sharrock’s second feature. The desolate beauty of a Scottish island on the edge of the world, the tender empathy with the plight of an outsider and the wry deadpan humour all lend bewitching flavours to Limbo. Amir El-Masry impresses as Omar, a musician who has fled conflict in Syria for a better life in the west. His days drift by in a desolate refugee centre. Stuck in limbo as others decide his future, his situation is marked by hostility, offers of friendship and small acts of kindness. A fresh perspective on the life of a migrant, the film breaks your heart and then tenderly pieces it back together again. Contact: Protagonist Pictures
Read Screen’s review

2. Nomadland
Dir. Chloé Zhao
Unassuming, compassionately obser­ved and melancholy in tone, Zhao’s Nomadland uses a quiet voice to make a stunning impact. There are echoes of John Steinbeck’s novel The Grapes Of Wrath in a tale of 21st-century migrants, homeless not houseless and refusing to accept the status of victim. Frances McDormand is superb. Contact: Searchlight Pictures
Read Screen’s review

3. Quo Vadis, Aida?
Dir. Jasmila Zbanic
A riveting dramatisation of events leading to the Srebrenica massacre in the summer of 1995. The sense of chaos, international failure and impending tragedy makes for an electrifying film. Jasna Djuricic is outstanding as Aida, the United Nations translator desperately striving to protect her husband and two sons from harm. Contact: Indie Sales
Read Screen’s review

5. Wolfwalkers
Dirs. Tomm Moore, Ross Stewart
Gorgeous, vibrant, autumnal coloured visuals and expert, fast-paced storytelling combine into a thrilling animated adventure that follows an English wolfhunter and his daughter as they arrive in 17th-century Kilkenny. A dazzling conclusion to the Irish folklore trilogy that began with The Secret Of Kells and Song Of The Sea. Contact: Apple TV+
Read Screen’s review

9. Preparations To Be Together For An Unknown Period Of Time
Dir. Lili Horvat
Read Screen’s review

City Hall
Dir. Frederick Wiseman
A monumental work from Wiseman in which his portrait of the governance of Boston becomes a celebration of civil society, public discourse and the ideals of democracy. A typically painstaking, immersive work from the master documentary-maker built on precise observation and compassion. Vital and timely, it felt like a reassuring balm in a year when so many cherished, long-established values were under threat. Contact: The Party Film Sales
Read Screen’s review

Enemies Of The State
Dir. Sonia Kennebeck
The meticulously assembled, stranger-than-fiction story of Matt DeHart, a hacktivist who fell foul of a vengeful US government. A film for conspiracy theorists and sceptics alike. Contact: Submarine Entertainment
Read Screen’s review

Time
Dir. Garrett Bradley
A beautifully composed personal story with a wider resonance, as one woman’s determination to free her husband from jail becomes an ode to human resilience and beating the odds. Contact: Amazon Studios