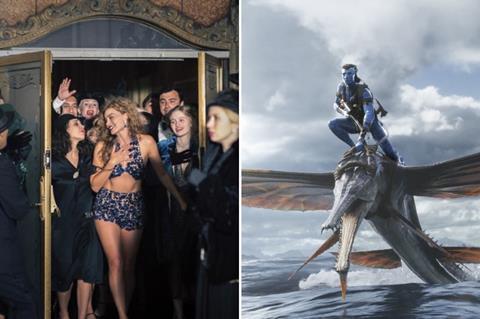 ‘Babylon’, ‘Avatar: The Way Of Water’

This weekend’s highest-grossing new opener at the UK-Ireland box office is Damien Chazelle’s Babylon, taking £1.32m for Paramount, and landing third in the weekend’s overall chart.

La La Land and Whiplash filmmaker Chazelle depicts the hedonistic days of the pre-sound film industry, kicking off in the late 1920s, with a cast led by Margot Robbie, Brad Pitt and Diego Calvo.

It is Chazelle’s widest-ever release in the territory, playing at 631 sites to an average of £2,091. His 2017 Oscar winner La La Land played at 606 sites for Lionsgate, bringing in £5.6m in its first weekend.

Robbie and Pitt have previously starred alongside one another in Quentin Tarantino’s Once Upon a Time in Hollywood – another film that takes a look behind-the-screens of the film world, but this time set in the late 1960s. It took £5.1m in its opening weekend in August 2019.

The top performer this weekend is Avatar: The Way Of Water, hitting the number one spot at the UK-Ireland box office for the sixth weekend on the trot, taking £2.8m for Disney. Its total is now £67.6m.

Viral sensation and horror film, Gerard Johnstone’s M3GAN, has made £1.4m at the box office in its second weekend – down 43% on its opener – for a total of £4.7m for Universal.

Sony’s performed well in holdovers this weekend: Whitney Houston: I Wanna Dance With Somebody added £766,097 to boost the overall total to £9.6m after four weekends. Its stablemate Roald Dahl’s Matilda The Musical also continues its impressive run, with £661,279 on its ninth weekend, for an overall figure of £25.8m, alongside A Man Called Otto that has £577,167 on its third weekend, grossing £3.6m.

Sam Mendes’ Empire Of Light’s second session brought in £445,000, for an overall figure of £2.8m, released by Disney through its Searchlight Pictures label.

Todd Field’s TÁR starring Cate Blanchett is Universal’s second-best performing title this weekend, bringing in £364,363, a small 8% slide on its opening weekend. Its overall figure is now just over £1m.

Animation Strange World added £88,000 to its haul for Disney on its ninth weekend, for a total of £3.8m. Disney is also continuing to bring in audiences for Black Panther: Wakanda Forever on its 11th session, taking £85,000 across the weekend, and £34.2m overall.

Fresh from its 10 nominations at the Baftas, Disney’s Searchlight Pictures title The Banshees Of Inisherin has added £40,000 to its total, which is at £9.3m after 14 weekends.

Trinity Film/Cine Asia released Ying Chi Wen’s Hong Kong feature Everything Under Control at 55 locations, chiming with Chinese New Year celebrations. It took £15,737 in its first weekend, for a site average of £286.

Lionsgate took £4,479 from 10 locations for Mary Nighy’s Anna Kendrick-headlined Alice, Darling, for a location average of £448.

Also out this weekend – Hide And Seek (Nascondino) played at one site, London’s Bertha DocHouse; Dogwoof’s Dreaming Walls played at seven; Sovereign had The Substitute at five; Modern Films’ More Than Ever at 15; and Parkland Entertainment released The Book Of Vision.