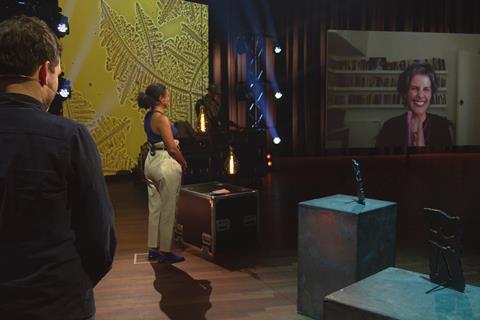 Firouzeh Khosrovani’s Radiograph Of A Family has won the best feature-length documentary award at International Documentary Festival Amsterdam (IDFA), which held its awards ceremony this evening in Amsterdam and broadcast online worldwide.

The film is Khosrovani’s take on growing up in Tehran and her parents’  relationship – her father a secular progressive and her mother a devout, traditional Muslim. It also takes in the conflicts of Iranian society in the run-up to and aftermath of the 1979 Iranian Revolution.

“As discontent grows with politics, many people experience their families divided on ideological lines,” said a statement from the jury. “Through masterful storytelling, Firouzeh shows how history and revolution brought about the political and personal divorce of her parents. The fractured body of family life is told through images, photos, and enactments in such a way that the viewer, too, feels the loss.”

The film also received the IDFA Competition award for Creative Use of Archive, with €5,000 prize. Screen spoke to Khosrovani about her film here.

The Competition jury awarded the best director prize, worth €5,000 to Vitaly Mansky for Latvia-Czech Republic title Gorbachev. Heaven, exploring the world of the final leader of the Soviet Union Mikhail Gorbachev. Mansky was one of a small number of international guests to make it to Amsterdam.

The Hong Kong documentary filmmakers collective received the best editing award, with €2,500, for Inside The Red Brick Wall. The group chose to participate in the festival anonymously due to risk of arrest under the Chinese government’s controversial National Security Law.

In the First Appearance section, Alina Gorlova won the main prize with €10,000 award for This Rain Will Never Stop, described by the jury as “a striking, beautifully shot and edited film that embarks on the disaster of war through a personal journey and rocks the spectator between furtive moments of joy and pain.”

A special mention was given to Diane Sara Bouzgarrou and Thomas Jenkoe for The Last Hillbilly, while the FIPRESCI award went to Ahmed Abd for The Fifth Story.

The €50,000 Prins Bernhard Cultuurfonds documentary stipend, for a documentary filmmaker with a proven track record to put towards a subject of their choice, was awarded to Afghan filmmaker Aboozar Amini, whose most recent feature Kabul, A City In The Wind premiered at IDFA 2018.

There was no DocLab competition this year due to travel and exhibition restrictions. Instead, the festival increased the prize money to €15,000 and put it towards its Creative Covid Response Support scheme, which looks to support filmmakers in presenting their work to new audiences after the festival. The prize money will be made available across three rounds; the festival will work with an international jury to select the best proposals.

IDFA 2020 continues in person an online until Sunday, December 6. To date, the festival has received more than 3,000 guests online, with visits to the online industry programme at more than 28,000.

The in-person element of the festival sold out with more than 15,000 visits; while there have been over 62,000 online film views.