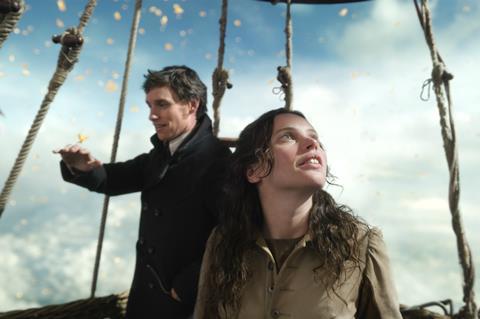 eOne’s The Aeronauts will hope to capitalise on momentum gained through a debut on Monday, November 4, as it heads into its first weekend in UK cinemas.

Directed by Tom Harper (Wild Rose), the film reunites The Theory Of Everything co-stars Eddie Redmayne and Felicity Jones as a scientist and pilot respectively, looking to fly their hot air balloon higher than anyone has ever been.

The film debuted at Telluride Film Festival in August, going on to screen at Toronto and London.

Redmayne and Jones both have excellent box office pedigree across independent and blockbuster fare. Working Title’s The Theory Of Everything had a £2.9m opening weekend through Universal in January 2015 and went on to generate an excellent £21.7m total gross.

The Aeronauts is the fifth feature for UK director Harper, who has also worked extensively in TV on series including Peaky Blinders, War & Peace, This Is England and Misfits.

Warner Bros unites three industry stalwarts in The Good Liar, as Bill Condon directs Ian McKellen and Helen Mirren in a thriller about a con artist (McKellen) who begins to care for the wealthy woman (Mirren) he is planning to rob. 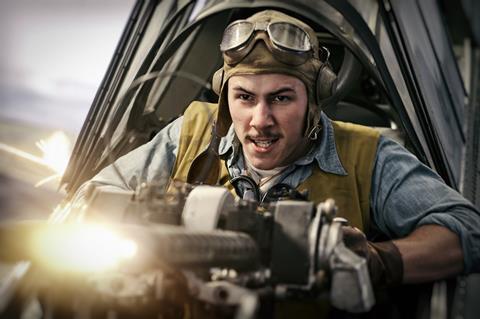 Nick Jonas as an air gunner in ‘Midway’

Also out this weekend is Roland Emmerich’s Second World War drama Midway, produced through Stuart Ford’s AGC Studios and with an ensemble cast led by 2013 Star of Tomorrow Ed Skrein.

German director Emmerich has made 17 features since 1984, the highest-grossing of which is 1996’s Independence Day, which made £37.1m from a £7m start.

Martin Scorsese’s The Irishman, which premiered at New York Film Festival, is considered an awards contender for the director and its lead cast Robert De Niro, Al Pacino and Joe Pesci.

Klaus, the Santa Claus origin story from former Disney animator Sergio Pablos, will look to gain attention from the family market before Frozen 2’s release in two weeks, on November 22.

Altitude is releasing Werner Herzog’s latest documentary, Meeting Gorbachev, in which the German filmmaker sits down with the final president of the Soviet Union to discuss his life. Herzog co-directed the film with André Singer, and it premiered at Telluride in September.

A strong performance from The Aeronauts, The Good Liar or even Midway might finally dethrone Joker. The supervillain story set a 2019 record of five weeks at the top of the charts last time out, and became the highest-grossing 15-rated title of all time in the UK on Thursday.

Also looking to take the crown through superior holds will be on-release titles The Addams Family, Maleficent: Mistress Of Evil, and Terminator: Dark Fate.