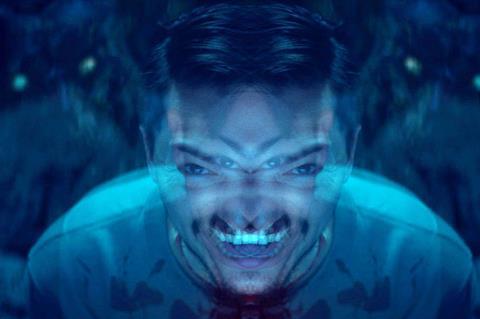 A trippy psychological thriller which flirts with body horror but never fully commits, Hypochondriac is a slippery, shape-shifting proposition which defies easy categorisation. The film follows the journey of Will (Zach Villa), a charismatic gay Hispanic potter who is jolted out of the comfortable existence he has made for himself when his bipolar mother re-enters his life. Her attempts at contact – she sends haphazard parcels full of empty DVD cases and recorded messages urging Will to beware of his perfectly nice and non-threatening boyfriend – re-open the scars of past traumas. And soon, Will starts to fear for his own mental health.

This atmospheric but slightly unfocused first feature is inspired by writer-director Addison Heimann’s own experiences of living with a bipolar mother. It screens at Fantasia as part of a festival run which started at SXSW and has taken in both genre events (Neuchâtel International Fantastic Film Festival and Panic Fest) and LGBTQ+ skewed programs (Outfest). Further festival slots are possible, and the film will be released by XYZ films in the US. Elsewhere, it may struggle to gain much theatrical traction, but could be a title of interest for a genre specialist streaming platform.

Scratchy home video of a child in a wolf costume, followed by a flashback to a particularly formative moment in the life of the then 12-year-old Will, gives some indication of the monsters which lurk in his psyche. But, for the while at least, they are safely buried. Skittish jump cuts and upbeat poppy score choices give us a sense of Will’s buoyant mood and exuberantly positive approach to life. He’s able to talk down a co-worker in the throes of a panic attack, and seems to be on the verge of taking his relationship, with Luke (Devon Graye), to the next stage.

The notification of a missed call from his mother is enough to tip the delicate equilibrium of Will’s life off balance. Indiscriminate googling of his stress-induced symptoms  stokes the fires of paranoia, and Will starts to be visited by a figure in a wolf suit. Tthere are hints of Donnie Darko, both in the unsettling presence of the lurking figure in an animal costume, and in the increasingly blurred distinction between reality and paranoid fantasy.

Villa (American Horror Story) is a striking screen presence who anchors the film in believable trauma, even as the overuse of hallucinogenic wigged out camera and editing techniques threatens to distract from the story. The body horror aspects are effectively grisly: Will’s forearms take rather a lot of punishment, one way or another, thanks to self-applied stab wounds and a close encounter with a kiln.

But the film suffers from the fact that while it captures the queasy uncertainties of a descent into mental illness, albeit through some fairly familiar techniques, it fails to explore much outside of Will’s personal arc. Niggling questions about his mother – is she really there? And if so, why is she not under professional supervision? - rather undermine the rest of the story.