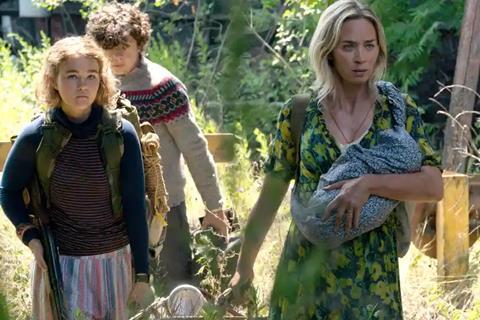 Paramount’s A Quiet Place Part II led the UK box office on its opening weekend, topping the initial performance of the first film.

Including previews, the sequel has taken £3.56m to date – 32% ahead of the first film’s full opening weekend figure of £2.7m. A Quiet Place went on to gross £12.1m in the territory. Paramount will open the sequel in a further 55 sites in the Republic of Ireland, where cinemas are cleared to reopen from today (June 7).

It held off strong competition from Sony’s family feature Peter Rabbit 2: The Runaway, on a sunny weekend across much of the territory where schools throughout most of the UK were on break for half term.

After two weeks in the top slot, the animation-live action hybrid moved to second place with £2m from 596 locations. This impressively matched last week’s takings for the sequel, which is up to £12.6m after three outings.

Disney’s Cruella held third place on its second weekend, taking £1.28m from 544 locations. This marks a drop of just 12% on last week and has now taken £4.45m after 10 days on release. The film launched simultaneously in cinemas and on streaming platform Disney+ on May 28.

It was behind Warner Bros’ horror franchise title The Conjuring: The Devil Made Me Do It, which took £1.03m on its second outing for a cume of £5.31m.

Also newly released was Signature Entertainment animation Felix And The Hidden Treasure, which opened with £26,412 from 235 locations. Adding previews, the feature is up to £43,011.

After Love, the feature debut of Screen Star of Tomorrow 2015 Aleem Khan, opened in 51 locations through BFI Distribution. It took £18,667 over the three-day period (with more sites yet to report). Including previews and its premiere at the BFI London Film Festival in 2020, it is up to £26,114.

Universal conducted its first full theatrical release since UK cinemas reopened, with Robin Wright-directed drama Land taking £14,615 for an average of £101 from 160 locations.

Curzon opened Robert Machoian’s US family drama The Killing Of Two Lovers in 10 locations, including the new Curzon Hoxton, taking £2,158 over the three-day weekend for a £216 screen average and a cume of £2,263.

Other Disney releases included Oscar-winner Nomadland, which added £88,000 for a cume of £1.7m after three weekends; and animation Raya And The Last Dragon, which £82,000 for a cume of £550,000 since May 17, when cinemas in the UK were cleared to reopen.