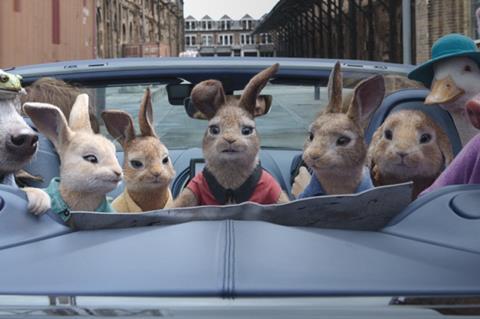 UK box office results for the first weekend post-lockdown in 2021 were positive, as Peter Rabbit 2: The Runaway topped the chart with a £3.8m weekend.

The Sony family adventure has taken £4.6m since its release on Monday May 17, at a location average of £9,285 – a hugely impressive figure given the social distancing measures in place at UK venues.

The £3.8m figure is up significantly on the £21,626 taken by the number one title – Disney’s Onward – in July at the first reopening. That film played in just 72 venues that weekend, and had already had its release prior to the pandemic; however the return to figures closer to the pre-pandemic results will be welcome news for distributors and exhibitors alike, suggesting increased consumer confidence.

Sony also had Evan Spiliotopoulos’ religious horror The Unholy in fifth spot, which opened to £250,391 across the weekend and has £455,391 since its May 17 opening.

Disney’s Oscar-winning Nomadland pulled in a strong £496,375 for second place, taking its cume to £874,784. The figures show an appetite for the film in cinemas, despite its simultaneous availability on Disney+. The studio also released animation Raya And The Last Dragon to a £213,770 weekend and £235,994 to date; and short The Human Voice, featuring Q&A from Pedro Almodóvar and Tilda Swinton, to £43,462 across five days.

Another title available on VoD, Warner Bros’ Godzilla Vs. Kong, took third place with a total gross to date of £1.2m – weekend figures for the film are still to come. 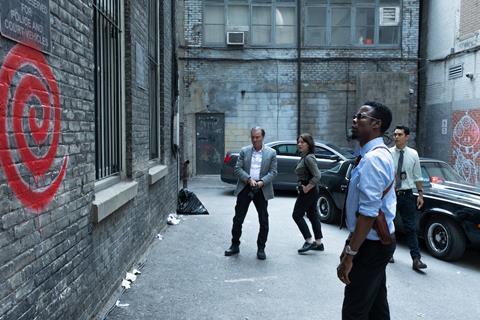 ‘Spiral: From The Book Of Saw’

Lionsgate landed in fourth with franchise title Spiral: From The Book Of Saw, which took £478,682 over the weekend and has £776,107 in total. The distributor also released Francis Lee’s romance Ammonite, taking £13,414 across the weekend and £130,324 including last week and festival/preview screenings.

Another Oscar winner, Vertigo Releasing’s Sound Of Metal, is up to £84,570 including previews, from 205 locations at an average of £413. Vertigo also released My New York Year starring Sigourney Weaver in 110 locations, grossing £19,568 at a £178 average.

Rare Beasts, the directorial debut of UK actor Billie Piper, opened to £17,000 from a limited release. This came predominantly through sold-out screenings on the Friday and Saturday, including Q&As with Piper.