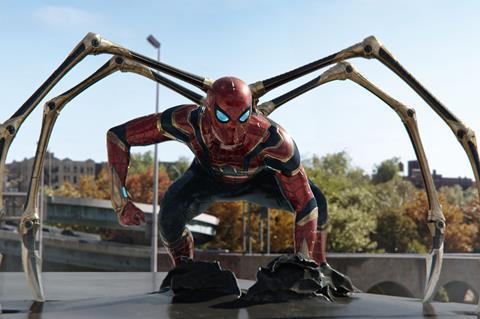 Sony blockbuster Spider-Man: No Way Home has recorded an astonishing £31.9m total opening session in the UK and Ireland – the fourth-highest ever in the territory.

The film took £19.5m on Friday to Sunday, added to a huge £12.39m from its first two days, including a £7.6m first day – the highest ever Wednesday opening in the UK and Ireland.

It surpasses the £25.9m opening of Universal’s No Time To Die from October; although that was from four days compared to No Way Home’s five. No Time To Die recorded a slightly higher first weekend of £21m.

These figures top the £27,231 first weekend location average of No Time To Die.

No Way Home’s full opening and opening location average are both the highest in the territory since the pandemic began.

The figures form a significant part of an enormous $588m worldwide opening – the industry’s third biggest of all time. Sony will look to build on this strong start across the holiday period, with cinemas still able to operate at full capacity in the UK, and at 50% in Ireland.

No Way Home is the third stand-alone film for 2012 Screen Star of Tomorrow Tom Holland as the titular superhero, who must face up to foes from the past when a spell by Doctor Strange, played by Benedict Cumberbatch, goes awry.

Clifford The Big Red Dog, released by eOne in the UK and Ireland, held second spot in the chart, surpassing West Side Story. The film dropped 40% on its opening session, with £766,000 and £2.38m total.

Playing on Sunday, December 19, event cinema title The Nutcracker - Bolshoi Ballet 2021  grossed £83,143 from 156 locations through Trafalgar Releasing, at an average of £533.

James Bond blockbuster No Time To Die dropped 62.5% on an impressive 12th session, with a £44,494 weekend. It has £96.4m total – the third-highest-grossing film of all time in the territory.

Valdimar Johannsson’s horror-thriller Lamb added £7,094 and has £81,244 from two weekends, through Mubi.