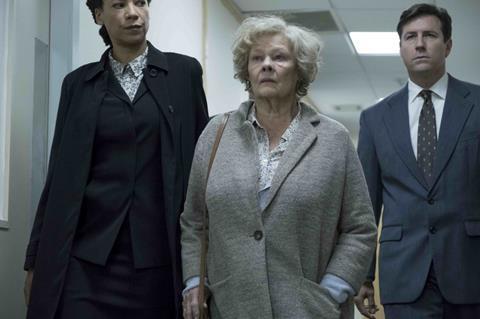 Produced by David Parfitt’s Trademark Films, the Lionsgate-distributed feature is led by Judi Dench and 2014 Screen Star of Tomorrow Sophie Cookson, and based on the novel of the same name by Jennie Rooney. Cookson plays Joan Stanley, a Cambridge physics student in 1938 who falls for a young communist; while Dench takes up the character in 2000 when MI5 come to arrest her.

The film will be aiming to top the figures for Dench’s most recent historical adaptation, Kenneth Branagh’s Shakespeare biopic All Is True, which opened to £264,972 in February this year and is nearing the end of its run, currently on £997,611.

Nunn, best known as one of the country’s most eminent theatre directors, has previously directed three features: Shakespeare adaptation Twelfth Night Or What You Will in 1996; historical drama Lady Jane in 1986; and 1975’s Hedda, an adaptation of Henrik Ibsen’s 1891 play Hedda Gabler, for which Glenda Jackson was nominated for best actress at the Oscars.

Also opening through Universal is Irish director Neil Jordan’s mystery thriller Greta, starring Chloë Grace Moretz as a young woman who befriends a lonely widow (Isabelle Huppert) who is harbouring a dark agenda towards her.

Jordan’s record gross in the UK is 1995 title Interview With The Vampire starring Brad Pitt and Tom Cruise, which started on £2.3m and ended on £10.7m.

Studiocanal is releasing S. Craig Zahler’s Dragged Across Concrete, starring Mel Gibson and Vince Vaughn. Zahler has previously directed 2017’s Brawl In Cell Block 99 (started: £5,421, ended: £11,223) and 2016’s Bone Tomahawk (started: £30,282, ended: £95,166). He is also the writer of another title out this weekend, Puppet Master: The Littlest Reich, which is released through Exploitation Films.

With a limited number of wide new releases, holdover titles are expected to dominate. Disney’s Dumbo retook the box office lead last weekend, hitting £17.7m total, and will expect to maintain it again.

Other performers looking to capitalise on the long Easter weekend include Shazam!, which had £8.9m after two weekends; Wonder Park, which opened on Monday 8th and brought in £1.6m from seven days; and Captain Marvel, which is rising the ranks of Marvel titles with £36.4m after six weekends, and should surpass Iron Man 3, Captain America: Civil War and Deadpool by the end of the weekend.