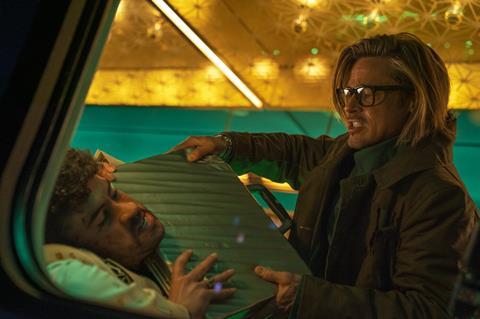 Sony blockbuster Bullet Train opens in 671 locations at the UK-Ireland box office on a quiet weekend for new releases.

Starring Brad Pitt with a supporting cast including Aaron Taylor-Johnson, Brian Tyree Henry, Joey King, Hiroyuki Sanada, Michael Shannon and Sandra Bullock, Bullet Train is set upon the fast-moving eponymous vehicle, as five assassins discover that their missions have something in common.

Like Bullet Train, the Ocean’s franchise unites a high-profile cast for comic hi-jinks; Sony will be hoping for similar results.

It is directed by US filmmaker David Leitch, whose previous films include Atomic Blonde (£1.7m opening; £3.8m total); Fast And Furious: Hobbs & Shaw (£6.4m; £20.1m); and Deadpool 2, which with a £32.9m total is the highest-grossing film ever at the UK-Ireland box office in which Pitt appears, although he only has a cameo role.

The supporting cast also have action and blockbuster pedigree, with Taylor-Johnson taking the lead role in the Kick-Ass films, and Tyree Henry appearing in last year’s Godzilla vs. Kong.

Despite box office takings tracking at 80% of 2019 numbers for the first six months of the year, August is relatively sparse for new releases.

There are just seven new films in cinemas this weekend, with five of these being limited releases of under 30 sites.

The other title to open in a bigger number is CinemaLive’s event cinema release of Westlife: Live From Wembley Stadium, with the concert film playing in 544 cinemas on Saturday 6, with encores in 391 on Sunday. 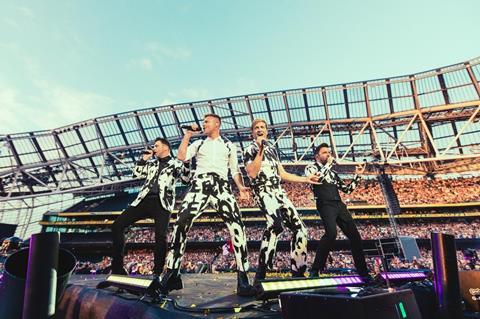 The Irish pop group have previously been on the big screen in 2012’s Westlife: The Farewell Concert (£572,525 total) and 2019’s Westlife – The Twenty Tour Live (£972,272). With holdovers populating much of the chart, a similar showing for the new release could be enough to push it into the top five.

The recent success of NTLive’s Prima Facie (at more than £2.5m as of last weekend) shows there is money to be made in the event cinema realm.

Other new releases this weekend include drag documentary Maisie in 10 sites through Bohemia Media; Nightclubbing: The Birth Of Punk Rock In NYC in 11 sites through MusicFilmNetwork; non-fiction Jordanian title Fadia’s Tree in nine cinemas through Verve Pictures; BFI Distribution’s re-release of 1972 crime drama The Harder They Come in 28 UK sites; and ICA opening Luisa Homem’s Suzanne Daveau in its London venue.

Cinema Rediscovered and Park Circus are also continuing a roll-out of early cinema titles in its Pre-Code Hollywood season, with six venues across the UK and Ireland booked for the coming weeks including BFI Southbank, Dublin’s Irish Film Institute, the Glasgow Film Theatre and Sheffield’s Showroom Workstation.

Bullet Train’s main competition will be last week’s number one DC League Of Super-Pets  from Warner Bros; plus former number ones Minions: The Rise Of Gru  from Universal and Disney’s Thor: Love And Thunder.