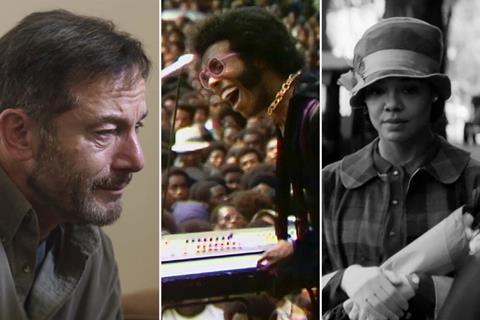 Sundance Online 2021 brought a fresh breath of air from the mountains. It turns out that strong curation of new global filmmaking was exactly what the industry needed in the middle of an online free-for-all.

And there was business to be done on the films which impressed the most, meaning what happened online digitally in Park City won’t stay in Park City.

1. Summer Of Soul
Dir Ahmir ‘Questlove’ Thompson
This documentary presents the music festival dubbed ‘Black Woodstock’ which took place in Harlem in the summer of 1969 and has since been forgotten. Director Questlove’s film is musically thrilling (Sly and the Family Stone, Stevie Wonder, Gladys Knight and her amazing Pips), wonderfully colourful – eye-popping costumes – but also politically and spiritually impactful. Bought by Searchlight and Hulu, a jury prize-winner, an audience prize-winner and immediately a musical documentary classic.
Read Screen’s review

2. Mass
Dir Fran Kranz
It’s hard to believe this four-hander set in a single room in the wake of a deadly school shooting is a directorial and screenplay debut for actor Fran Kranz, who shows a command of dialogue and a confidence of pace. Arresting performances from Ann Dowd and Jason Isaacs, in particular; emotionally wrenching but also, somehow, cathartic viewing.
Read Screen’s review

3. The Most Beautiful Boy In The World
Dirs Kristina Lindström, Kristian Petri
The moving story of the child star of Visconti’s Death In Venice has sold widely for Films Boutique, both prior to and after its festival screening. In the film, the boy Tadzio was prized by an ageing gay man for his beauty – a situation mirrored when 15-year-old orphan Björn Andrésen walked into Visconti’s casting session, irrevocably changing the Swedish actor’s life.
Read Screen’s review

4. Passing
Dir Rebecca Hall
Hall’s directorial debut is a striking drama set for wide attention even if it hadn’t been picked up by Netflix post-fest. Shot in black and white and featuring unforgettable performances from Ruth Negga and Tessa Thompson, Passing is set in 1929 Harlem with all the glamour of that age disguising the story of an uneasy friendship between two women who have made radically different choices in their lives.
Read Screen’s review

5. Hive
Dir Blerta Basholli
This small-scale audience and World Cinema-winner is set in a woman’s relish-making collective in Kosovo and hits on the right recipe. Women left in limbo after the mass murder of the town’s men – who have yet to be identified – struggle to find a way to move forward, especially in a place where morality is highly prized – and extends to females not being allowed to drive a car. A lovely lead performance from Yllka Gashi in this debut from Blerta Basholli. Sold by LevelK.
Read Screen’s review

6. CODA
Dir Sian Heder
Apple paid $25 million for this remake of a French drama about a young girl – the titular child of deaf adults – who must strike out on her own. Worth it? Yes. CODA brings a pleasing texture to the standard coming-of-age drama and there’s a superb lead performance from Emilia Jones, backed up by Marlee Matlin and Troy Kotsur as her earthy, loving parents in this Massachusetts fishing community. Good music too.
Read Screen’s review

8. Eight For Silver
Dir Sean Ellis
An entertaining howler of a werewolf drama from Ellis, set in France at the end of the 19th century. A corrupt landlord makes a mistake when he sets a gypsy encampment alight and it is his village that will pay the price – along with his son. Boyd Holbrook stars in this fun genre piece.
Read Screen’s review

9. Wild Indian
Dir Lyle Mitchell Corbine Jr
Michael Greyeyes gives a thrilling, chilling performance as a man who thinks he has left his Wisconsin Reservation past behind him. A threatening drama in the arthouse mould set for wide festival play and an impressive debut by Mitchell Corbine Jr, a talent to watch.
Read Screen’s review

10. All Light, Everywhere
Dir Theo Anthony
How do we see things? Differently, after Anthony’s experimental documentary which is a real conversation-starter. This cinematic essay which looks at what we actually take in through our eyes is a pleasingly cerebral piece which poses some lingering questions.
Read Screen’s review