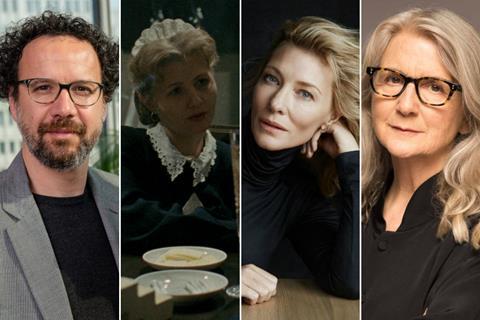 Berlin Film Festival has announced its Competition lineup for the 70th edition, which runs from February 20 - March 1.

Screen has picked out six key talking points to arise from the selection.

How soon is DAU?

The inclusion of Ilya Khrzhanovskiy’s controversial project DAU will spark a fury of speculation ahead of the festival. First conceived in 2006 as a biopic of Russian physicist Lev Landau, the production built the Institute for Research in Physics in Kharkov, Ukraine for a two-year shoot in which hundreds of participants came to live and work as if they were in the 1950s. A version of the work launched in January 2019 as a series of feature films, visual art projects and live installations playing non-stop for over three weeks in Paris.

This iteration, titled DAU. Natasha, is co-directed by Khrzhanovskiy and Jekaterina Oertel, a makeup artist with credits including Roland Emmerich’s 10,000 BC. Another work from the over 700 hours of recorded footage, called DAU. Degeneration, plays as a series in Berlinale Special, co-directed by Khrzhanovskiy and Ilya Permyakov. It is marked as a documentary, with no such classification for Natasha; both are listed as world premieres. What footage will transfer from the Paris performance? How long will the screenings be? What exactly went on at the Institute? Watch this space…

Outgoing artistic director Dieter Kosslick signed the 5050x2020 charter on gender equality at last year’s event, pledging to ‘work to increase parity in the Festival and the Film Market’. This morning Chatrian said the aim for 50/50 was “a process”. The Berlinale will announce the jury to serve with chair Jeremy Irons in the next week or so.

US stars in town for TV rather film

The Hollywood star wattage in Potsdamer Platz will come from the Berlinale Series strand this year. Chatrian pointed to Cate Blanchett and Damien Chazelle, who have both created TV series - Stateless and The Eddy  - who will be in town to support their Berlinale Series premieres.

There are no huge US stars or directors with films in the Competition. The obvious omission is Wes Anderson whose films regularly screen at the Berlinale, a tradition stretching back to The Royal Tenenbaums in 2001. The French Dispatch now looks a shoo-in for a Cannes spot. It’s the first film the France-based Anderson has shot in France and it’s set in a fictional French city and features Cecile de France and Lea Seydoux in its usual starry cast.

Where is the new German talent?

Three German filmmakers feature in this year’s Competition line-up, ranging from Berlinale regulars to newcomers to the director’s chair. Afghan-German director Burhan Qurbani returns to the festival with buzz title Berlin Alexanderplatz, having had his debut feature, Shahada, play in competition in 2010. The previously mentioned German makeup artist Jekaterina Oertel is credited as a co-director on DAU. Natasha with Russia’s Ilya Khrzhanovskiy. In addition, Christian Petzold returns with drama Undine, having previously played Transit, Barbara, Yella and Ghosts in competition at the festival.

Nina Hoss, who has starred in six Petzold films including Yella (for which she won the Silver Bear for best actress in 2007), also appears in competition but in rival feature My Little Sister, from Swiss duo Stéphanie Chuat and Véronique Reymond.

Last year’s line-up also featured three German filmmakers in competition: Fatih Akin, Angela Schanelec and Nora Fingscheidt, who was last year’s break-out talent with the success of System Crasher. It’s hard to see at this stage who will be this year’s Fingscheidt.

No Netflix films in the Competition

There are no films produced by a US streamer in the Berlinale competition following Isabel Coixet’s Elisa & Marcela for Netflix last year.  “Our criteria is an artistic one,” said Chatrian when asked about this at the press conference. “These are the best ones to represent cinema.”