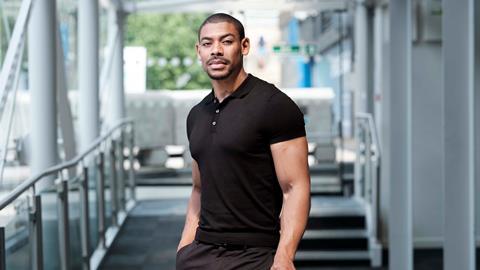 When it came to casting Amazon series The Underground Railroad, Aaron Pierre auditioned without even knowing it. The London-born actor was on stage at the Globe Theatre playing Cassio in Othello when Oscar-winning filmmaker Barry Jenkins came to see his Moonlight star André Holland in the title role.

“Not long after, Barry sent me a direct message on Twitter to show his support, appreciation and a lot of love,” recalls the 27-year-old actor. “He also said, ‘Let’s find something to collaborate on.’” He was then asked to self-tape an audition for The Underground Railroad.

Catching the eye of Jenkins was the culmination of a decade of preparation. Having been obsessed with athletics as a teenager, Pierre’s ambitions took a different track on winning a role in a school play. “It was a domino effect,” he says, recounting how he joined the Croydon Young People’s Theatre before studying performing arts at Lewisham College, training further in Toronto, and winning a place at Lamda, from which he graduated in 2016.

He secured his first screen role in TV mini­series Prime Suspect 1973 but came to international attention in 2018 as soldier Dev-Em in DC comic-book series Krypton. “It introduced me to an American audience.”

He was spotted by Jenkins that same year, and went on to win the role of Caesar in The Underground Railroad, an adaptation of Colson Whitehead’s book that puts a magic-realist spin on its story of slavery in America’s Deep South of the 19th century. Pierre will soon reteam with Jenkins to voice Mufasa in an upcoming prequel to The Lion King.

Recalling his experience on The Underground Railroad, which received seven Primetime Emmy nominations, Pierre says: “Everybody [had] the same objective — to tell this story as truthfully and authentically as possible, and to honour those who went through this and their magnitude of strength.”

Pierre has since been seen in M Night Shyamalan’s mystery horror Old, and has feature projects with Netflix and Amazon in the pipeline.