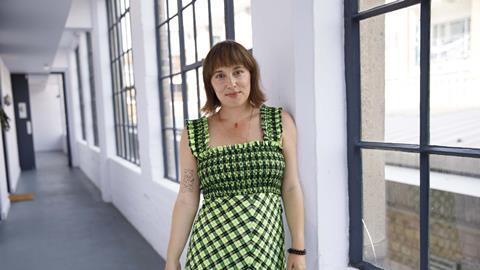 Having come late to a career in film, Gini Godwin is forging ahead at top speed. She landed her first production design gig at the age of 29, but only six years later her next big film will be actor/director Aml Ameen’s Boxing Day, billed as the UK’s first wide-release Black romcom (sold by Rocket Science, it will go out locally through Warner Bros). This follows the hit Blue Story which, like Boxing Day, was produced by Godwin’s frequent collaborator — and 2020 Star of Tomorrow — Joy Gharoro-Akpojotor.

Initially unsure of her life plans, Birmingham-born Godwin trained at London’s Royal Central School of Speech & Drama and did an MA in design at Central St Martins art school, before launching a children’s clothing business. But nothing felt right. Then she had a pivotal request. “Two of my friends run Fizz and Ginger Films,” she says. “They were making their first feature [Matthew Butler-Hart’s Two Down, 2015] and the producer Tori [Butler-Hart] asked me to do the set and costumes. I did, but I had absolutely no idea what I was doing.”

Godwin was hooked, and that low budget feature opened up a career that has taken in shorts and features including Ruth Platt’s Martyrs Lane, which premiered this year at Fantasia film festival, and upcoming drama The Almond And The Seahorse, the joint feature directing debut of veteran DoP Tom Stern and actor/screenwriter Celyn Jones.

As part of her aim to “find stories that deserve to be told, and make them as beautiful as possible”, in November Godwin will start work on BBC drama Champion, created by author Candice Carty-Williams (Queenie) and produced by Gharoro-Akpojotor.

With a natural eye for the creative elements of her job, Godwin says the biggest learning curve has been “dealing with the crew and making sure you have the right team” — hence her collaborations with Gharoro-Akpojotor. “Being a bit older, you realise that when you like the people you work with, you’re more invested. This job is so insane, you spend so much of your time doing it, you might as well do it with people you like.”