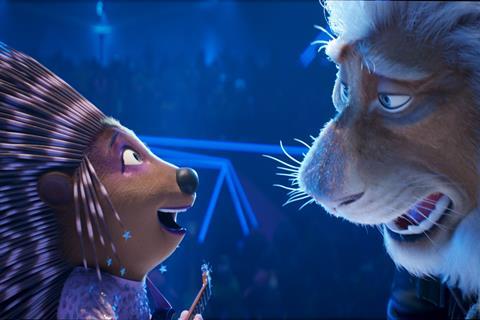 After six weeks, Spider-Man: No Way Home’s reign at the top of the UK-Ireland box office is over thanks to a strong debut from Sing 2.

The Universal animation sequel, once again written and directed by Garth Jennings, opened well ahead of the competition with £6.8m from 631 sites for a location average of £10,776.

That’s up on the 2017 original’s £6.25m debut, athough that opened on 555 sites. It’s the biggest animated opening of the pandemic, and the third biggest overall behind No Time To Die and Spider-Man: No Way Home.

In more good news for Universal, Kenneth Branagh’s Belfast posted a strong £1.89m on its second weekend, dropping just 18% and bringing it to £6m in total.

That was enough to push Sony’s Spider-Man: No Way Home into third spot. The record-breaking superhero sequel was just behind Belfast with £1.8m, a fall of 24%, for a £89.9m total. This saw it move past Avengers: Endgame to become the sixth-highest grossing film of all time in the territory.

Yasuhiro Yoshiura’s anime title Sing a Bit of Harmony opened with £21,000 from 110 sites through Sony.

BFI Distribution’s reissue of Frank Hurley’s South – considered to be the first-ever documentary feature - opened with a £3,729 weekend total, plus £5,816 in previews.