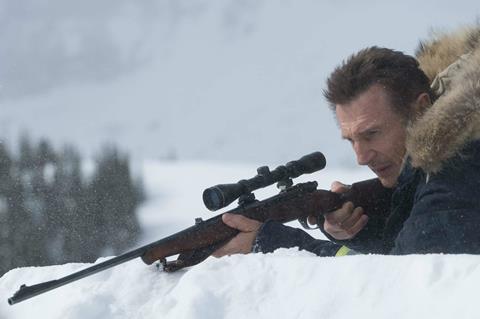 Studiocanal’s revenge thriller Cold Pursuit will aim to weather the storm of recent controversy around star Liam Neeson to challenge a selection of family titles at the UK box office this weekend.

In the film, Neeson plays a snowplough driver who seeks revenge against the drug dealers he believes killed his son. Hans Petter Moland directs, with the film based on his 2014 Norwegian title In Order Of Disappearance.

Earlier this month, the actor provoked controversy with remarks made in an intervew with UK national the Independent, which led to US distributor Lionsgate cancelling the red carpet at the film’s New York premiere.

Elsewhere, several key holdovers are expected to benefit from the final days of the UK schools half-term holiday. The LEGO Movie 2 will look to hold top spot and build on its £7.4m after two weekends. The first title, 2014’s The LEGO Movie, made £3.3m on its third weekend, taking it to £26.7m by that point.

Paramount comedy Instant Family will look to challenge for first place after a £2.5m opening.

Universal animation How To Train Your Dragon: The Hidden World is still in the mix heading into its fourth weekend, sitting on £11.5m after three sessions. The second title in the series recorded a £1.9m fourth weekend, as part of a £12.9m cume at that point.

The Kid Who Would Be King had a disappointing start, making £665,491 including previews, but will also look for a bump in its second session from the half-term family crowd.

‘On The Basis Of Sex’

eOne will open Mimi Leder’s On The Basis Of Sex, the story of US Supreme Court Associate Justice Ruth Bader Ginsburg, in 452 cinemas this weekend. 2007 Screen Star of Tomorrow Felicity Jones plays Ginsburg, opposite Armie Hammer as her husband Martin.

Verve Pictures has Toby MacDonald’s comedy Old Boys led by Screen Star of Tomorrow 2015 Alex Lawther. It is the first of six titles Verve is releasing through its non-profit first feature distribution support scheme, which was backed by a £135,000 BFI Audience Fund award in September 2018.

MusicFilmNetwork will distribute documentary Teddy Pendergrass: If You Don’t Know Me, about the US soul singer in 1960s America, in select locations.

Alongside the half-term hopefuls, other holdovers include Alita: Battle Angel and Green Book.