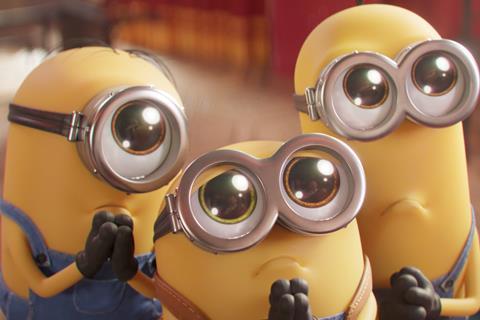 Audiences suited up and turned out in their droves for the opening weekend of Minions: The Rise Of Gru, taking it to the top of this week’s UK-Ireland box office chart.

The Universal title, directed by Kyle Balda, Brad Ableson, Jonathan Del Val and featuring the voices of Steve Carell and Taraji P. Henson, took £10.4m from 637 locations, averaging £16,327 per site. It was Universal’s widest ever UK-Ireland opening for an  animation title.

Supervillain Gru’s origin story has comfortably beaten last month’s big animation release from Disney, Lightyear, which opened to just over £3.7m from 654 sites, for an average of £5,685.

Paramount’s Top Gun Maverick added £2.7m in its sixth weekend, down 22% on its previous session. Its cumulative total now stands at £68m, making it the 16th highest grossing film of all time at the UK-Ireland box office, above Rogue One: A Star Wars Story at £66m and Toy Story 4 at £66.2m.

Jurassic World Dominion took £1.8m in its fourth weekend for Universal, with its cumulative figure now standing at £30.4m.

Horror The Black Phone brought in £576,251 in its second weekend for Universal, with an overall figure of £2.6m.

Daniel Kwan and Daniel Scheinert’s Everything Everywhere All At Once took £57,549 in its eighth weekend. The A24 title’s overall figure is now just shy of £5m.

Picturehouse’s Cannes title Nitram opened to £20,750 from 59 sites, averaging £352. Including previews, its total stands at £42,000. The Cannes premiere is directed by Justin Kurzel and examines the deadliest shooting in Australian history, when in 1996 35 people were killed in Tasmanian town, Port Arthur. Caleb Landry Jones leads, a role for which he won the best actor award at Cannes 2021.

Altitude’s Princess Diana archival documentary The Princess took £3,430 from 18 sites, for an £191 average, and a total of £10,957 when factoring in previews. It is directed by Ed Perkins.

Takayuki Hirao’s animation Pompo: The Cinephile, adapted from a manga series and released by Anime Ltd, debuted with £1,140 from 14 locations in its opening weekend, to a site average of £81. The total is plumped up by £9,683 from previews at 64 locations and festival screenings, to an overall figure of £11,562.

Ronnie Sandahl’s Tigers, based on a true story about a promising young Swedish footballer, opened to £969 from 10 sites for Studio Soho Distribution in its first weekend, averaging £97. Previews brings the figure up to £1,503.

Curzon’s retrospective of German filmmaker and Cannes Palme d’Or winner Wim Wenders saw Alice In The Cities take £749 from five locations for a site average of £150; Buena Vista Social Club took £737 from three locations for an average of £246 and Kings Of The Road took £235 from two sites, averaging £118. Wings Of Desire add £7,781 in its second weekend, with a cumulative now of £42,495.