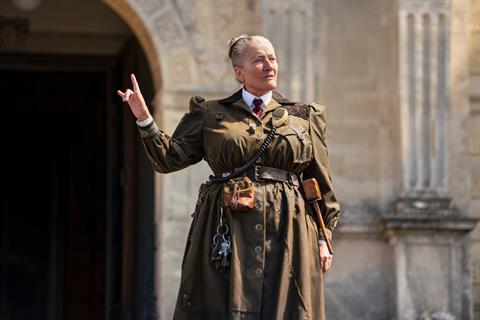 Roald Dahl’s Matilda The Musical is leader of the pack at this weekend’s UK-Ireland box office, with £4.1m from 668 locations for Sony.

This meant an average of £6,138, way outperforming its recent Sony family musical stablemate Lyle, Lyle, Crocodile, which took £1.7m in its October opening weekend, for an average of £2,756.

The BFI London Film Festival (LFF) opening night film is directed by Matthew Warchus, with Dennis Kelly writing and Tim Minchin composing, and is based on the stage musical created by the same trio. Working Title produces, with Netflix releasing around the rest of the world from December, and in the UK in summer 2023. Emma Thompson, Stephen Graham, Andrea Riseborough and Lashana Lynch star, with newcomer Alisha Weir in the titular role.

It’s proof of the ongoing allure of Roald Dahl’s source material. Steve Spielberg’s The BFG took £5.3m from 680 sites in its opening weekend in July 2016.Roald Dahl’sThe Witches missed out on its chance at a proper theatrical push owing to its 2020 pandemic release.

Black Panther: Wakanda Forever   has been knocked off the top spot on its third weekend, taking £2.7m for Disney – down 56% on its previous session, bringing its total up to £27m.

Universal’s Maria Schrader-directed She Said – the story of New York Times reporters Jodi Kantor (Zoe Kazan) and Megan Twohey (Carey Mulligan) and their investigation into Harvey Weinstein – took £349,513 in its debut weekend from 530 sites, for an average of £659. With £95,293 in previews, its total stands at £444,806.

Warner Bros’ Bones And All   broke out with £210,257 from the weekend, with an average of £445 in its 472 sites. Its total is fleshed out to £318,242 thanks to £107,985 from previews. The Timothée Chalamet-led Venice premiere is directed by Luca Guadagnino and traces two outsiders on a 1,000-mile journey through Ronald Reagan’s America.

Disney’sThe Banshees Of Inisherin brought in £111,403 in its sixth session, a 66% decline on its previous weekend, with a total of £8.5m.

Netflix released Toronto premiere and LFF closing night film Glass Out: A Knives Out Mystery in all three major UK cinema chains, Odeon, Cineworld and Vue. It is the first time the US streamer has done this. It played at over 100 sites, according to the Film Distribution Association, with Altitude handling theatrical bookings. Netflix does not report box office figures, however early indications suggest strong location averages.

The Rian Johnson-directed sequel, headlined by Daniel Craig, is playing in a seven-day theatrical window, from November 23-29, before hitting Netflix on December 23. This weekend, Netflix also released Lady Chatterley’s Lover, starring Emma Corrin and Jack O’Connell, in fewer than 25 sites.

It was a decent week for Trafalgar Releasing. Comedian and Matilda composer Tim Michin’s stand-up show Tim Minchin: Back played live on Wednesday (November 25), with eight locations playing across the weekend. It grossed £2,346 (average of £293) at the weekend, but with an overall figure including Wednesday’s live screenings of £155,353. The distributor also took £112,339 from 313 sites on Sunday alone for Adam Penford’s A Christmas Carol: A Ghost Story, filmed live at London’s Alexandra Palace theatre, with Mark Gatiss starring, for an average of £359.

Signature’s Three Day Millionaire – a dark comedy directed by Jack Spring about a group of locals who plan a robbery in Grimsby for the greater good, starring Colm Meaney – took £4,625 from 16 sites, for a location average of £289. With previews, its total rises to £13,053.

Yash Raj Films’ Hindi-language crime thriller Drishyam 2 continues its respectable run, with £61,870 in its second outing, taking its total to £287,423.

Universal’s enduring animation Minions: The Rise Of Gru recorded a 67% drop, with weekend takings of £18,155 in its 22nd session, and a cumulative figure of £46.8m.

The Legend Of Maula Jatt has taken £12,661 from its seventh weekend for Moviegoers Entertainment, bringing its total to £1.4m.

Trinity Film’s The Sparring Partner grossed £6,476 in its second weekend, bringing its total up to £72,348.

In its second weekend, Universal’s James Gray-directed Cannes premiere Armageddon Time brought in £5,664, down 91% on its opening, for a total of £130,439.