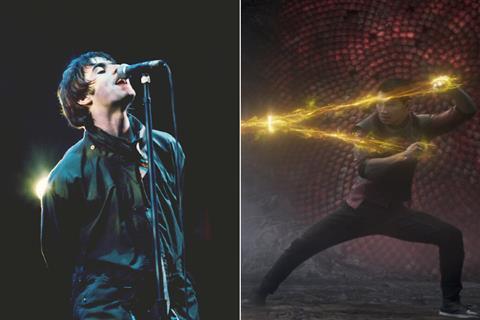 ‘Oasis Knebworth 1996’, ‘Shang-Chi And The Legend Of The Ten Rings’

Concert documentary Oasis Knebworth 1996 has become the highest-grossing documentary in 2021 at the UK-Ireland box office to date, and has broken into the top five on its first weekend.

Distributed by event cinema specialists Trafalgar Releasing, the film screened in 450 locations on both Thursday September 23 and Friday 24, taking £289,446 and £314,610 on the two days respectively.

With encore screenings on Saturday and Sunday, the film’s Friday to Sunday figure of £344,833 was enough to push it up to fourth spot for the weekend.

Directed by UK filmmaker Jake Scott, who has previously made music videos for the band themselves as well as Radiohead, R.E.M. and U2, Oasis Knebworth 1996 uses concert footage from two seminal gigs Oasis played at Knebworth House in Hertfordshire, alongside interviews with both the band and audience members.

Disney’s Shang-Chi And The Legend Of The Ten Rings held the top spot for a fourth consecutive week, adding £1.6m – a drop of 33%. Still pulling in well over £2,000 per location, the film now has £18.3m total, and is coming up on Black Widow with £18.8m as the second highest-grossing film of the year.

It has also become the 19th out of 25 Marvel Cinematic Universe titles by total gross, with Captain America: The Winter Soldier’s £19.4m well within its sights.

The highest new opener this weekend was The Sopranos prequel The Many Saints Of Newark for Warner Bros, taking £615,850 on Friday to Sunday at an average of £981, with £945,063 since its Wednesday September 22 opening. 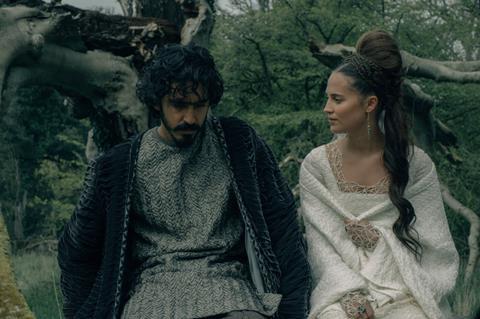 One of the strongest performances of the weekend came from David Lowery’s The Green Knight, taking £166,021 from just 73 locations for Entertainment Film Distributors. This brought a location average of £2,274 – only just pipped for the highest in the top 10 by Shang-Chi.

A third Universal title in the top 10, The Croods 2: A New Age, went up three percent compared to the previous weekend - the third time it has increased takings week-on-week across its run. £152,401 took it to £9.6m from a lengthy 11 weekends.

Jungle Cruise is another with a long tail, adding £130,920 in its ninth session for Disney to reach £12.4m total. Of the nine titles to have passed the £10m mark so far in 2021, four have been released by Disney.

Qismat 2 scored the biggest-ever opening for a Punjabi film in the UK, grossing £138,540 including previews from 76 locations, at a strong location average of £1,611 across the Friday to Sunday.

Another new title out this weekend was Dogwoof’s The Alpinist, which started with £58,558 from 108 locations. Including previews the documentary has £77,870, making it the highest non-concert film documentary opening of the year so far

Universal’s Spirit Untamed increased its takings for a second successive session, going up 5% with £53,758 taking it to £3.3m from nine sessions. The studio also has People Just Do Nothing: Big In Japan, which added £31,516 in its sixth session to reach £2.3m.

The re-release of David Lynch’s 1984 sci-fi Dune took £39,582 from 255 locations, making it the highest back catalogue title of the weekend and showing interest in the story ahead of Warner Bros’ new version on October 22.

Parkland Entertainment’s The Last Bus rolled into a fifth weekend in cinemas, adding £12,367 to reach £359,698 in total, marking a great result for a limited independent release.

Studio Soho Distribution’s Oscar-nominated The Man Who Sold His Skin opened to £3,285 from 18 locations, and has £4,022 including previews.

Studiocanal’sGunpowder Milkshake is closing out after only two weekends in cinemas, with £2,864 taking it to £59,573 total.

A 17-location release of The Ballad Of Billy McCrae from Munro Films brought in £1,069.