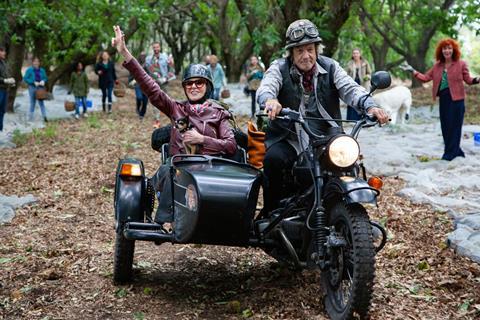 Around two-thirds of France’s sales companies will officially participate in the Pre-Cannes Screenings running June 21-25.

There are a variety of gameplans. Companies with mainstream slates and non-festival titles expect to do the bulk of their meetings next week. Those with a combination of both will get the ball rolling on titles across their slates, focusing on buyers who do not plan or are unable to travel to Cannes in July.

Official Selection and parallel sections are strictly not allowed to screen in the Pre-Cannes event but many sellers plan to lay the groundwork for pre-sales. A handful of companies focused purely on festival titles will be sitting out the online event to focus on the physical festival and market in July.

Screen highlights the buzz titles due to be rolled out by French companies next week.

Charades will launch Laurent Tirard’s new comedy Oh My Goodness!, about five nuns who enter a major cycling race as part of a money-raising scheme, and Sébastien Marnier’s upcoming thriller The Origin Of Evil, starring Laure Calamy. It will also tease images for Un Certain Regard selection La Traviata, My Brothers And I and Critics’ Week title Zero Fucks Given. The slate also features Palme d’Or contender Petrov’s Flu for which it has already unveiled the trailer.

SND unveils two films in pre-production: Eric Barbier’s Tehu about the adventures of a berber boy and a camel and featuring Charlotte Gainsbourg in the cast; and Anne Le Ny’s thriller Spiral, starring André Dussollier as a man who accidentally kills his cheating wife and then gets caught in a web of deception and lies. It will also market premiere family animation Pil’s Adventures and Song Express about an Uber-style start-up supplying songs on demand.

Studiocanal will begin sales on psychological thriller Cat Person, adapted from Kristen Roupenian’s short story which became one of the most downloaded pieces of fiction when The New Yorker published it in 2017. Susanna Fogel directs and Nicholas Braun and Emilia Jones are confirmed to star. Other new buzzy projects on its slate include horror-thriller Baghead, starring Freya Allan. Cannes titles comprise Marseille-set police thriller Bac Nord by Cédric Jimenez and Emmanuelle Bercot’s Peaceful, both of which screen Out of Competition.

Pathé International kicks off sales on Italian director Emanuele Crialese’s 1970s Rome-set family drama L’Immensita starring Penelope Cruz. It is due to start shooting in Rome on July 5. It will also roll out David Moreau’s drama King about a French brother and sister’s quest to get a trafficked lion cub back to Africa. Other upcoming titles include Guillaume Canet’s upcoming China-set feature Asterix & Obelix, The Silk Road which is currently shooting. At Cannes, it has Paul Verhoven’s Palme d’Or contender Benedetta.

TF1 Studio kicks off sales on comedy Two Much For The Job, starring Melha Bedia and Audrey Fleurot as two teachers competing for the same dream job in Barcelona, and Alexandra Leclère’s Price Of Parenting, reuniting Josiane Balasko and Didier Bourdon as a couple suffering from empty nest syndrome who pretend they have won the lottery to draw their children back. It will also market premiere When Granny Meets Grandpa [pictured], about a grandmother with amnesia who connects with a mysterious man from her past; Philippe Lacheau’s superhero spoof SuperWho?; and Michèle Laroque’s Dancing On. 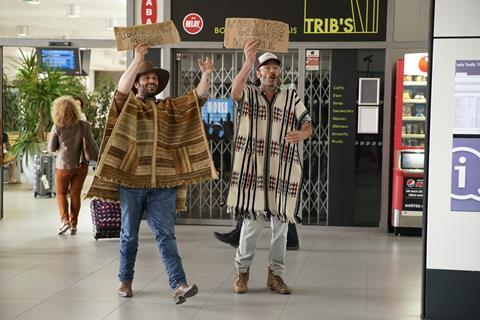 Memento International will focus on the human-trafficking thriller Catch The Fair One, which has just world-premiered in Tribeca’s US narrative competition to warm reviews. It will also launch sales on Israeli director Gidi Dar’s animated feature Legend Of Destruction which recounts the story of the ruin of Jerusalem’s Second Temple, to which Waltz With Bashir animators David Polonsky and Michael Faust are attached. At Cannes, it is handling Asghar Farhadi’s Palme d’Or contender A Hero.

Totem Films will begin talks on its three Cannes titles comprising Palme d’Or contender Compartment No. 6, for which it has just released the trailer, Un Certain Regard selection Moneyboys and Softie, which will world premiere in Cannes Critics’ Week. It will also continue sales on My Sunny Maad following its premiere in competition at Annecy.

Urban Distribution International will market premiere live-action and animated feature Coppelia, starring celebrity dancer Michaela DePrince, following its world premiere in Annecy, and will also show the first promo for Dutch director Floor van der Meulen’s debut feature Pink Moon, about a woman who kidnaps her father and takes him on a trip to the mountains after he declares he no longer wants to live. It is also handling the Mexico-set kidnap drama La Civil which debuts in Un Certain Regard.

Alpha Violet will tease footage of Laura Samani’s debut feature Small Body ahead of its world premiere in Critics’ Week. Set in Italy in 1901, it follows a woman desperate to get her stillborn baby baptised. It also screens Baris Sarhan’s Rotterdam 2021 title The Cemil Show.

France TV Distribution will show the first trailer for actress Sandrine Kiberlain’s debut feature A Radiant Girl ahead of its debut in Critics’ Week. It will be keeping its other Cannes title, Emmanuel Carrère’s drama Between Two Worlds, under wraps until its world premiere in Directors’ Fortnight. It will also show the first images for Sylvie Audcoeur’s psychological thriller An Ordinary Mother, starring Karin Viard.

Loco Films screens Georgian director Levan Koguashvili’s warmly reviewed Tribeca 2021 title Brighton 4th and will market premiere The Champion Of Auschwitz about a Polish boxing champion who was interned in the concentration camp and joined its resistance movement.

MPM Premium will market premiere documentary Into The Wine, about wine-making in Burgundy as well as Argentinian coming-of-age thriller Fall Of The Queens. It is also handling Directors’ Fortnight title Europa.

Bac Films International will show the first promo for French whodunnit The Murder Party and market screen thriller A Decent Man. At Cannes, it is handling French director Rachel Lang’s Our Men which is the closing film of Directors’ Fortnight.

The Party Film Sales will begin talking to buyers about its Cannes titles, comprising Cannes Première selection Jane By Charlotte by Charlotte Gainsbourg and Directors’ Fortnight titles Returning to Reims and The Sea Ahead. It will also market screen a selection of festival films from the first half of the year including Claus Drexel’s Ladies Of The Wood.

Cité Films market premieres Mathieu Rozé’s drama Azuro about a group of friends whose annual holiday together is shaken up by the arrival of a mysterious man.

Wide Management will kick off sales on new acquisitions Phil Connell’s JUMP, Darling, about a rookie drag queen who takes refuge with his grandmother after a setback.