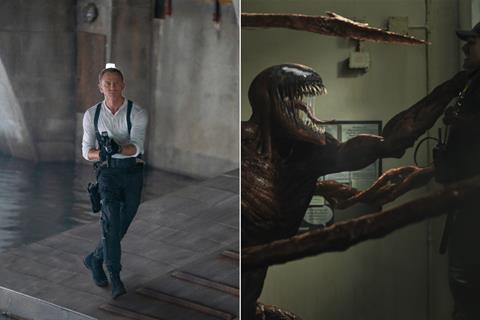 ‘No Time To Die’, ’Venom: Let There Be Carnage

No Time To Die has topped the UK-Ireland box office for a third consecutive session, with a £8.4m weekend taking it to an impressive £68.6m total.

Skyfall  and Spectre ended on £103.2m and £95.2m respectively; performance to date suggests Universal’s No Time To Die may finish in between the two.

While it didn’t manage to dethrone Bond, Sony’s Venom: Let There Be Carnage made a strong start with £6.17m from Friday to Saturday. Playing in 602 locations, it took an excellent average of £10,244.

Both its opening weekend and location average are the second-highest of 2021, behind only No Time To Die.

Universal took the number three spot with new title Halloween Kills, which opened to £1.6m from 500 locations at an average of £3,175. This is a 40% fall on the £2.7m opening of 2018’s Halloween, the first title in a reboot of the franchise.

The studio also held fourth spot with animation The Addams Family 2, which dropped 32% on its opening weekend with £1.4m taking it to a £3.9m cume. The 2019 first film in the series ended on £9.9m, which may be beyond the sequel.

Disney completed the top five with another new entry, animation Ron’s Gone Wrong. Created by UK studio Locksmith Animation, the film opened to £865,333 from 554 at an average of £1,562. While this is below the stellar numbers of No Time To Die and Venom 2, it represents a decent start for a non-franchise title not based on previous IP, in a competitive box office.

Takings of £18.4m for the top five were up 1.9% on last weekend, with a broader spread of well-performing titles. This was the first weekend since the pandemic when four titles grossed over £1m in a three-day session. 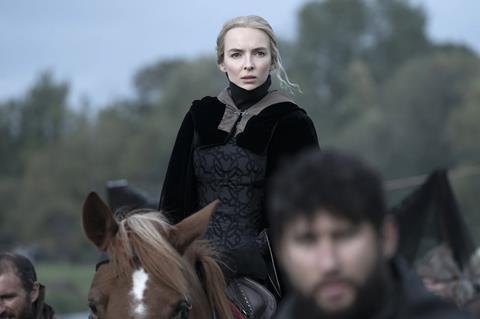 A 25th-anniversary re-release of Scream grossed £90,000 from a one-day special screening on Tuesday 12, reaching a £116,000 cume through the weekend with encore screenings, for Paramount. The distributor also has The PAW Patrol Movie, which dropped 45% in an impressive 10-week run with £70,000 taking it to £8.4m.

Picturehouse Entertainment opened Malgorzata Szumowska’s Never Gonna Snow Again to £18,294 from 38 locations at an average of £494, passing the start of the distributor’s recent releases including Deerskin, Wildland, The Reason I Jump  and Frankie.

The Beta Test began with £7,163 including previews for Blue Finch Films.

New Wave Films’ The Invisible Life Of Euridice Gusmao opened to £7,104 from 15 locations at an average of £474.

Event cinema release Exhibition On Screen: Raphael Revealed took £13,041 for since a Tuesday 12 opening for Seventh Art, including £3,406 across the weekend, with several sites still to report.

Rep title The Outsiders: The Complete Novel took £3,525 across the weekend for Studiocanal, and has £5,861 including previews.